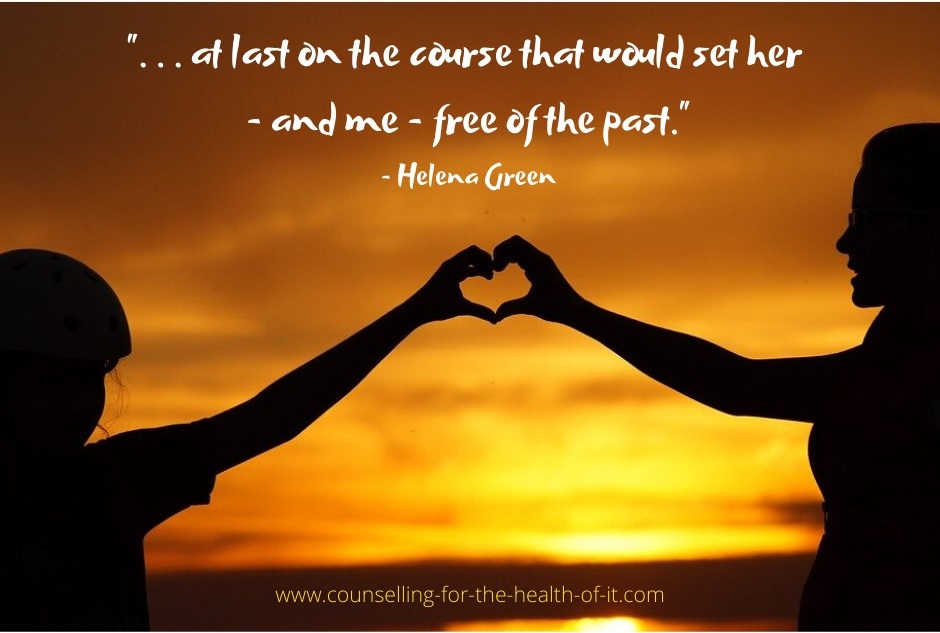 Having had Diabetes since I was a teenager, my pregnancy was considered to be “high risk.” The pregnancy affected my sight to the degree that I was legally blind. At that time, the doctors gave me extensive laser therapy for ‘Cystoid Macular Edema’ that left me with my right eye’s vision compromised. That was 38 years ago. Apparently, all that laser work precipitated macular degeneration in my left eye and blind spots in both. Ironically, it would have been much better to not have the laser treatment since the edema reversed after the delivery.

So, I would travel to Vancouver for a treatment every six weeks for a number of years. Twice the procedure (a needle in the eye) worked. The third time it recouped only 25% of what was lost. So, in my pivotal appointment in 2008, I envisioned my trip to be a “Vision Quest,” in this case literally meaning renewed vision.

Getting on the ferry was a challenge, to say the least, but I thankfully boarded at the rear of the ship on the lower deck. To my delight, I noted that the section where I parked displayed an eagle (my animal totem) as the place mark. I thought, “Wonderful, my spirit guides are with me.”

I was to meet my 26 year old daughter at her house before heading out to the clinic. My relationship with her had been difficult, to say the least. So, the window of opportunity represented very rare quality time for us to be alone together. When I arrived, I was greeted with the typical cool, almost surly, manner that had become the trademark of her stance toward me. She seemed intent on painting her wall, rather than converse with me. So I settled Zoe (my Yorkie) on the deck with food and water, then did a Tai Chi set. The rest of the time there with her was spent in a rather stiff and awkward exchange of unimportant chatter. We didn’t discuss my vision or my procedure.

The trip to the clinic was no better. Once there, the gruelling sequence of tests (angiogram, OCT scan, eye pressure, etc.) and treatment took a record three hours. That’s a relatively short amount of time - Yikes! When the doctor came in to give me the needle, he announced, “I get to be the bad guy today.” I promptly said, “It would be great if you would change that to, ‘I get to be the healer today’.” He agreed and proceeded. (I still wonder if he embraced his pivotal role from that day forward.) I must say that his technique was the gentlest to date.

I was finally done and ready to go with my daughter to Swiss Chalet for a chat before heading home. She helped me to the car since the first little while after an injection is a little rough. Her mood seemed to sour even more. In the meantime, I felt not only sorry for myself, but also increasingly sad about the terrible state of our relationship. By the time we got to the restaurant, I had decided that I would pay for part of her forgone wages, gas and just a snack. I just wanted to exit from an impossible, agonizing, and seemingly un-mendable heartbreak.

As we sat in the cool shaded tables outside the eatery, I asked her what her problem was.  My daughter began to talk. She began to tell me about her own pain; about dynamics and events in her childhood that had left scars and kept her in a sort of living hell. I knew that this day had needed to come for some time. Although it was hard to hear, I was able to listen from a stance that was not the mother, nor part of the knot in her soul. I heard her account from a step back where I could see her world without getting defensive. For the first time, I simply stopped and really listened - totally present for her only.

I discovered that any time that I had shared my problems with my health, it had triggered her. Rather than a bridge of compassion that was my hope and expectation, my strategy made her snap back to her brokenness in her childhood. A feeling of great emotional weight (from her father and I) landed on her Spirit. I listened and held her pain with her in a shifted, different way. It was a new window of healing and of surrender to her process. Dear God, I never knew that she felt that way. I was at least able to reassure her that she was always loved and cherished as the only child that I would ever have in my life. From this pain-informed yet renewed beginning, we charted a course – together – to wellness and wholeness for her. I will undoubtedly navigate some of that way along side of her.

When we said goodbye, I felt a much deeper bond with her and trust that she was at last on the course that would set her – and me - free of the past. As I crossed the Georgia Strait toward Vancouver Island and home, I gave thanks for the unexpected twist in the renewed vision that was the original target of my quest.  As it turned out, the vision was as much about my daughter as it was about my eyes. I was granted a new perspective of hope and faith for my daughter’s wellbeing, as well as our relationship.

As far as my eyesight goes, new medicines have helped widen the gap between injections and my acuity level is holding. With my driver’s license intact, I’m still in the game:-) I’m doing my best to take care of myself and I’m prepared for whatever comes my way. Ultimately, I know that I am very blessed.